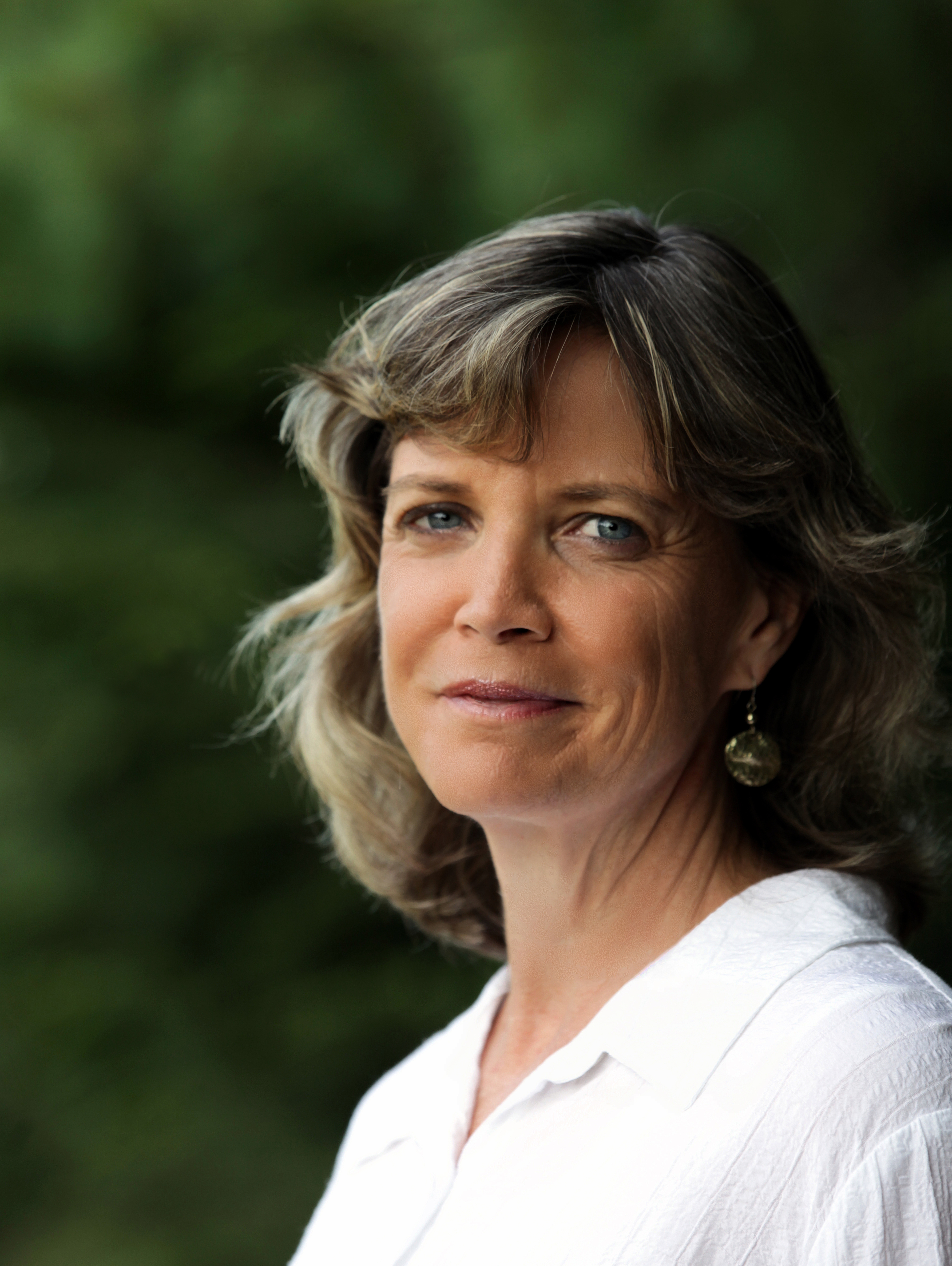 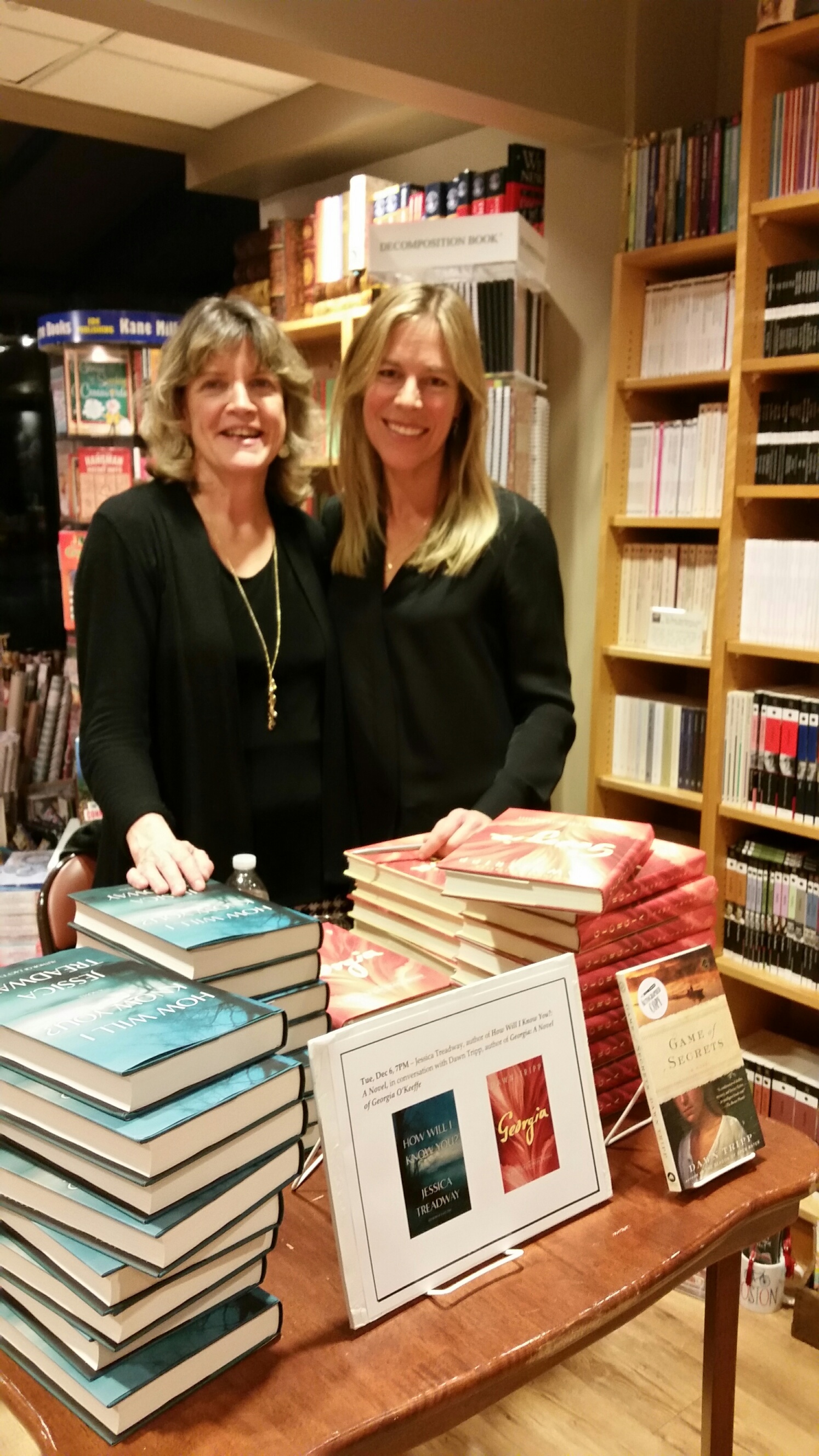 With Dawn Tripp at launch of How Will I Know You, Newtonville Books 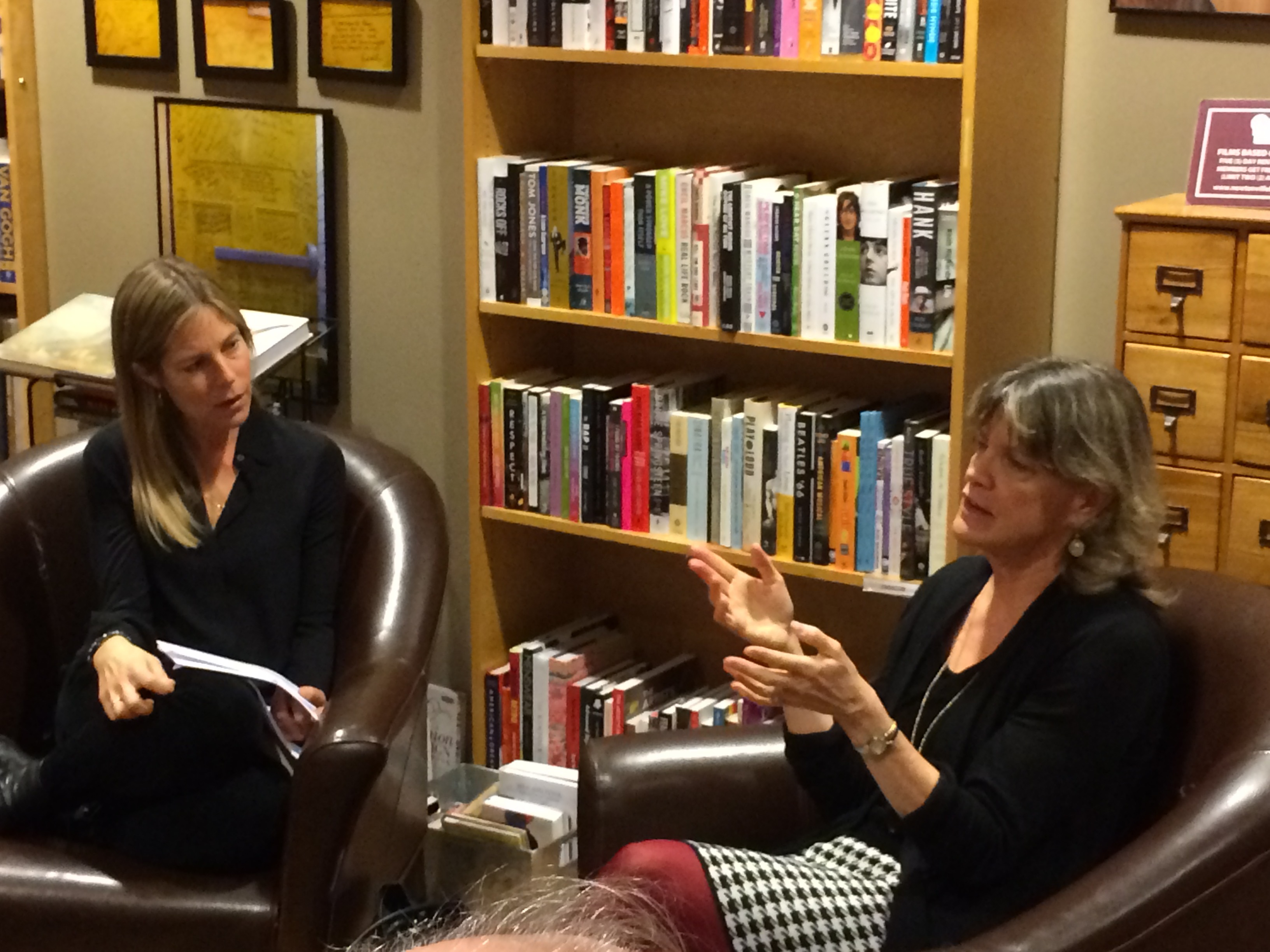 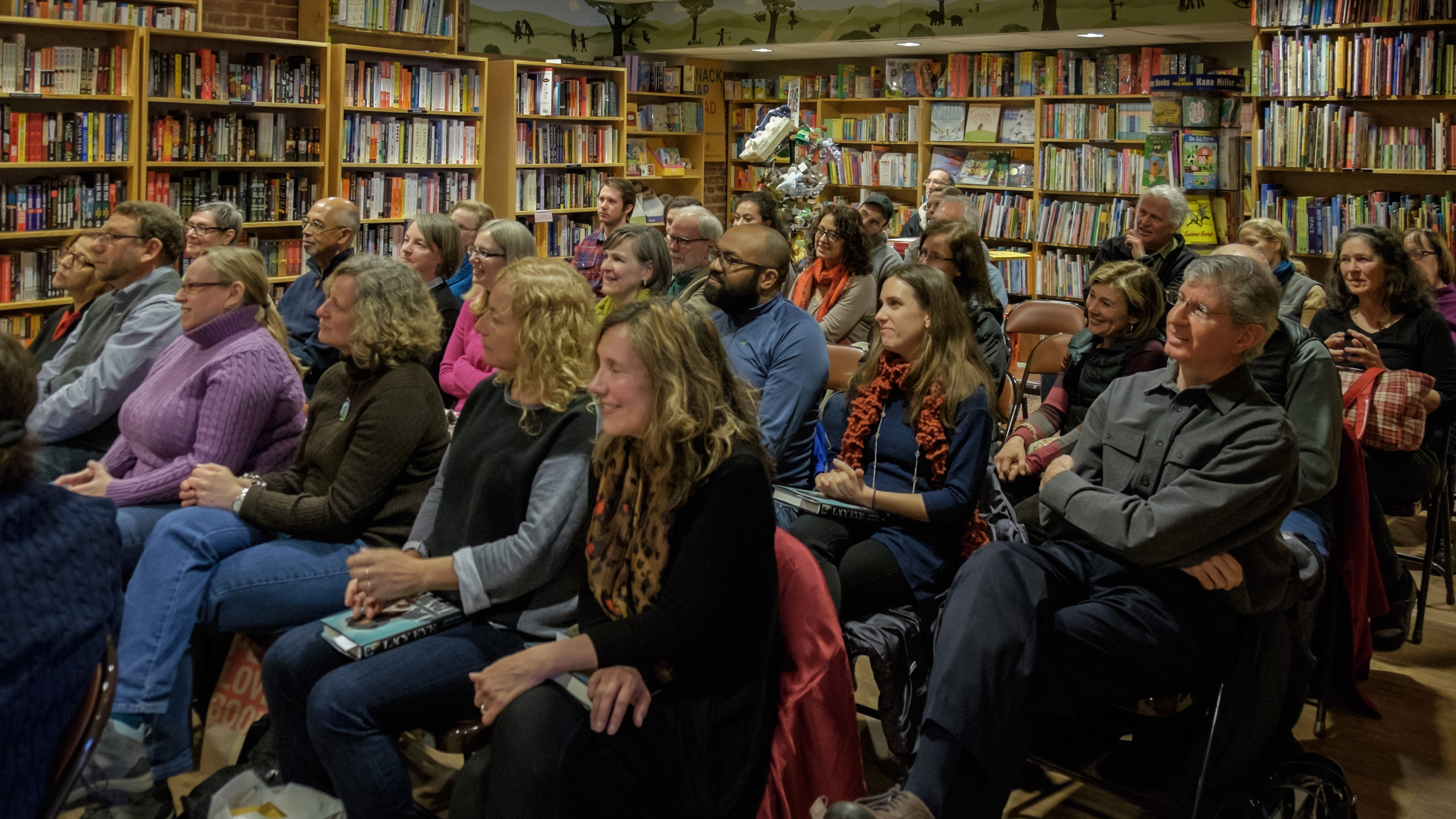 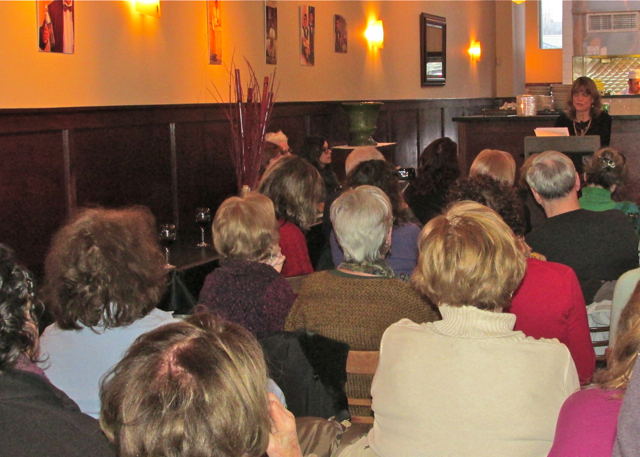 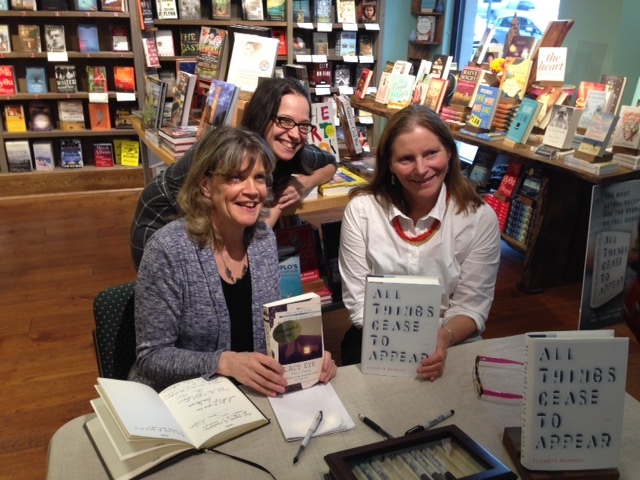 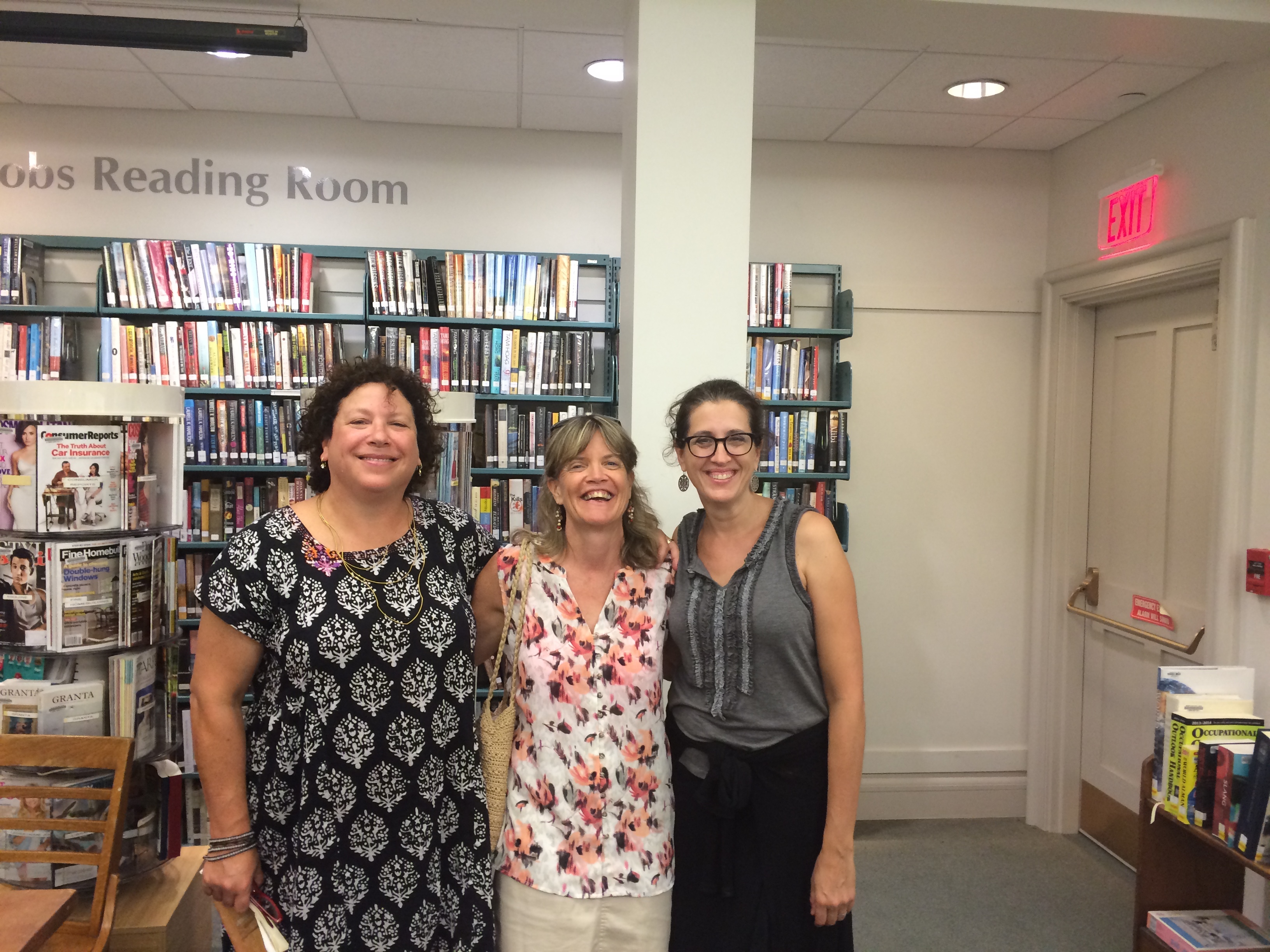 With Hester Kaplan and Heidi Pitlor in Provincetown 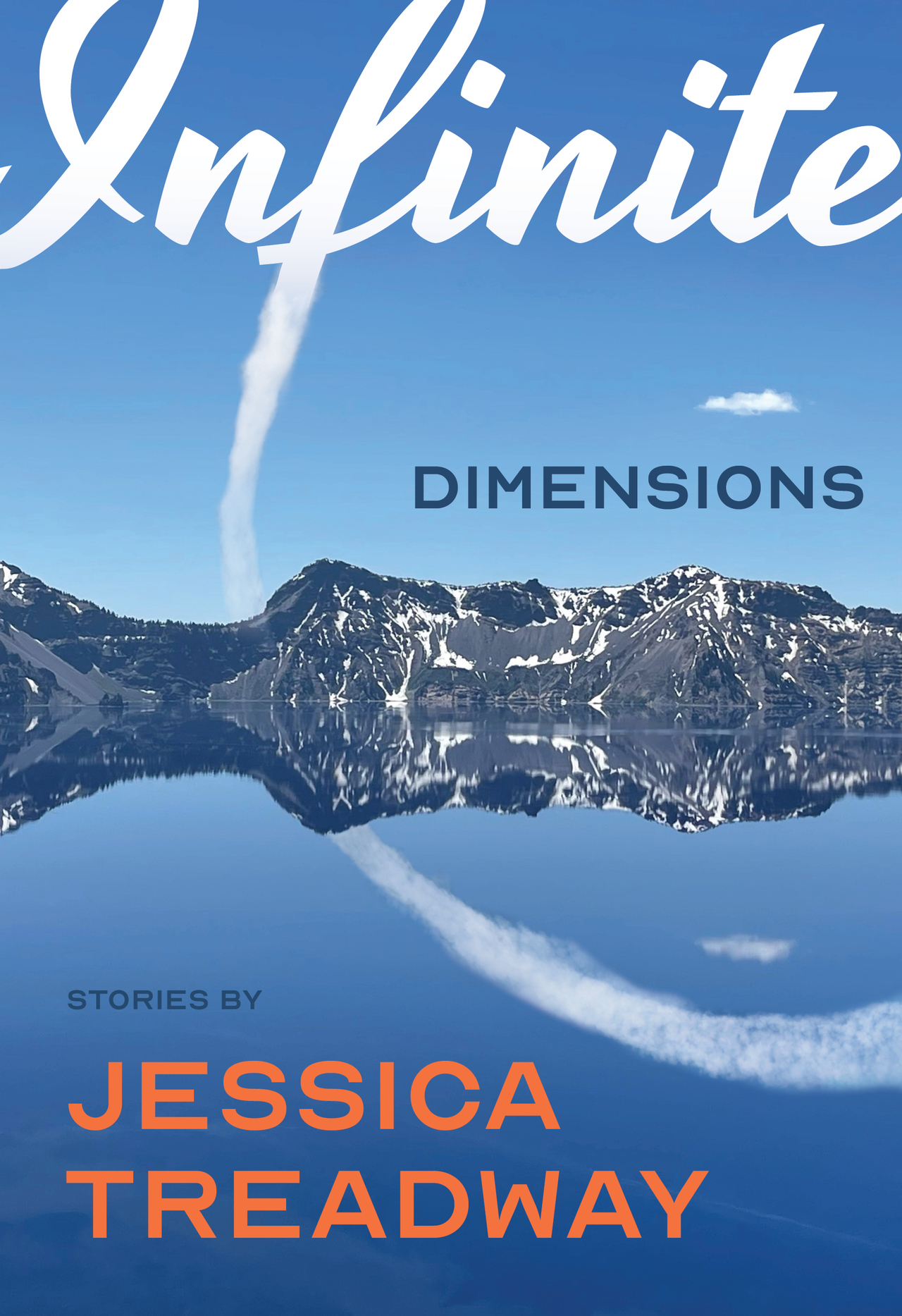 In Infinite Dimensions, her first collection after winning the Flannery O'Connor Award for Short Fiction for Please Come Back to Me, Jessica Treadway writes about the themes of fidelity, betrayal, and self-delusion as she portrays what William Faulkner called "the human heart in conflict with itself." Treadway mines the internal landscapes of her characters as they try but often fail to live up to their own standards of integrity. A female bank executive with a history of psychiatric illness is forced to decide whether to hire her former hospital roommate, whom she fears will expose her past. A college student discovers the benefits and costs of plagiarizing a paper. A recovering alcoholic faces the prospect of self-sabotage during a dinner meeting with an editor who can make or break her career. The stories are loosely linked by the motif of a fictional fabulist writer and her most famous story, about a Russian housewife whose sugar bowl interrogates her regularly about her moral life.

Jessica Treadway's intense and moving stories are connected by an intriguing thread, yet each one stands alone as a gem of intuition and empathy. This is a stellar collection.

Hilma Wolitzer, author of Today a Woman Went Mad in the Supermarket

What an exquisite gift Jessica Treadway has given readers with her latest short-story collection, Infinite Dimensions. A masterclass in the story form, Treadway's riveting collection awakens us to the marvel of our ordinary lives, even as it demonstrates how little it takes to shatter them…. This book is simply astonishing.

E.J. Levy, author of The Cape Doctor and Love, in Theory

She knew that none of her fellow passengers on this flight to Phoenix would have any idea what kind of journey she was embarking upon. If they bothered to guess, they might get part of it right: a grandmother, traveling alone so probably widowed, on her way to visit grandchildren who lived across the country. This was all true. It was the part she admitted to her seatmate, a flushed and swollen woman in her middle thirties who ordered two Bloody Mary mixes with her tomato juice, when it wasn't even noon yet in any of the time zones they would inhabit during the flight. The woman was on her way to see her sister in a desert rehab facility favored by celebrities. "She was always the wild one," the woman told Helen, not seeming to notice the peanuts that fell out of her clenched fist and inside her blouse.  "Just because I'm older doesn't mean I could have done anything about it—it's not my fault."

"I'm going to see my son and his family," Helen said. "They live near Camelback."  When Ethan and Sandra had moved there twelve years earlier, Helen and Bob kept up with them on a hike to the top of the mountain (Helen had thought she would be the one to slow down the excursion, but it was Bob who stumbled, twice on the rocky climb, and wouldn't let Helen shout ahead to alert Ethan and Sandra) and then they all celebrated by going out for Mexican food. Helen and Ethan and Bob ordered margaritas, and after Sandra smiled at them while asking the waitress for a seltzer, she and Ethan broke the news that she was pregnant. Helen remembered the expression on her son's face as he reached for his wife's hand and let her say the actual words. He looked the same way he had on his first day of kindergarten, when all the kids stood outside the classroom door with their mothers, waiting for the teacher to call their names, at which point they crossed the threshold and went inside to begin school. At both moments, his face betrayed the belief that he might not be able to bear the weight of the emotions the occasion required of him.

But he had; he had borne them. And much more, Helen knew, even though she had not been present at her granddaughter's birth, or at her grandson's, or at the moment Ethan received Helen's own phone call notifying him of his father's death. She had not been present when the doctor summoned Ethan and Sandra into his office to explain what was happening in Ethan's bloodstream, what they could do for him, and for how long. Though she would not dare confess it to anyone, Helen was ashamed to feel glad she had not been there for that appointment. She was quite sure she would have failed to manage it. She had no idea how she was going to manage the trip she was making now, which was not in fact a visit, but something else.

These days she moved through the world with the sense that she had either escaped from prison or been set free. The relief never left her; no matter what she did or thought about, it ran beneath, a current of euphoria at finding herself on the other side of captivity. A dozen moments a day, she felt shocked by her own happiness. It kept revealing itself to her, a surprise each time. She had not since she was a child been tempted to believe in God, but she considered it now because she so often felt the impulse to thank someone—or something—for the tectonic shift that had sealed shut the fault lying under her life.

What the fault consisted of exactly, she did not know. She had not discerned it in all the years with so many therapists, or during the hospital stays she endured when her condition paralyzed her to the point that she could not keep herself safe, to use the therapists' term.

Act as if, the last one had counseled her, when Amy said she didn't feel worthy of having the kind of life that seemed to come so naturally to everyone else. Pretend you're the person you want to be. They've done studies. You'll start to feel that way. Amy scoffed at this New Age hooey—weren't they supposed to uncover, together, what lay at the heart of her despair?—but she must have followed the advice without being conscious of doing so, and it had worked.

Her husband Jack said it was all to her credit, that she alone had pulled herself out of what he referred to as her "bad time," which he had never witnessed. Amy herself was sure that the only thing separating her from the dead patients was luck. She certainly wasn't a better person than those who never recovered themselves; in fact, she suspected she was worse. Though once it happened—the correction, the conversion—she resolved to do her best to believe she deserved this better life, and to live up to the kind of person she seemed to have become.

The truth was that she rarely let herself think about the woman she had been before she married Jack, before they became parents to Laurel, before they moved to the town she'd once driven to three days a week for her appointments with the psychiatrist Amy could barely bring herself to look at because the other woman was so clearly superior to her in every way that just meeting her eyes caused her to choke with humiliation. She seldom let herself remember details from her stays in the hospital, such as eating meals with plastic forks because she couldn't be trusted with stainless, or the pride she felt when she worked her way up to the privilege of going to sleep without a "sitter" assigned to watch her all night from a chair by the rubbery bed.

She knew that she probably should have figured out, by now, what it was that accounted for her transformation from a psychiatric patient on suicide watch to someone who managed other people's money for a living, not to mention an attorney's wife and a soccer mom. Soccer mom! As ridiculous a status as she knew it was to aspire to, when she sat on the sidelines to watch Laurel play with the other kids in the Hobbit League, she had the distinct feeling that this, this, was what clinched it—she was normal now, there was no going back. She didn't let herself think about the time she'd tucked her hair up into a baseball cap, then pulled the cap down over her eyes, before sneaking into these same bleachers to watch her therapist's son playing offense for his team. She'd watched the therapist chatting and laughing with the other mothers, feeling her own failure grow and gather in her gut. By the time she left the field, she was doubled over. She never told the therapist what she'd done, and—improbably, inexplicably—it was soon after this episode that she began waking in the mornings feeling lighter than she could remember, pods of hope pinging in her heart.

A fluke, she thought. At least at first. But when the hope persisted—when she felt stronger, and the strength kept building on itself, multiplying, pitching her forward into a life more joyful than she had ever dared to imagine, she made the decision without quite realizing it to forget about all those years, or at least to push them so far aside that they rarely if ever intruded on her now.

She also understood in some unvisited cellar of herself that by not understanding why her unhappiness left her, she might be inviting it to come back.

It had not returned, so far. But Dina Broward had.

HOW WILL I KNOW YOU?